Jamie “Hot Shoe” Hales began his racing career in 1978, and quickly gained the attention of the BMX community. In a time when the sport was largely dominated by the more experienced NSW and QLD riders, it wasn’t long before Jamie Hales put Victoria on the Australian BMX map. BMX was one of the fastest growing sports in the country, and he became the dominant rider racking up dual National Open Mens titles. He won the first Official National Championships in 1981 and then backed it up with another in 1982 at his home track of Waverly in Melbourne. 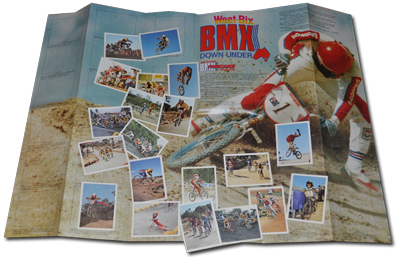 In 1982, he was the face of Australian BMX. With Guest appearances on National television broadcasts,  including prime-time clinics on ABC television, and featured articles in the biggest publications of the day, he became Australia’s first BMX superstar. He even featured on Weetbix cereal packets inspiring youngsters from all over the country to take up the sport. BMX capitalised on this with Jamie touring the country giving some of the earliest coaching clinics and demonstrations at schools and shopping centres.

But it wasn’t just at home that Jamie made a name for himself - in 1981 he took home World #2 in the B Pro Class against top American competition, before showing that he could take on the best that America could send back home in Australia.

After seemingly retiring from the sport in 1985, he returned in 1998 to claim another National title - this time in the 35-39 Masters Class and going on to finish 8th in the UCI World Championships in Melbourne the same year.

Throughout his career, Jamie raced for iconic brands such as Quicksilver and Mongoose and was an extremely valuable asset for his sponsors. He was an inspiration to an entire generation of young BMXers, even contributing to his own “Ask Jamie” column in Australian BMX Pancake magazine.